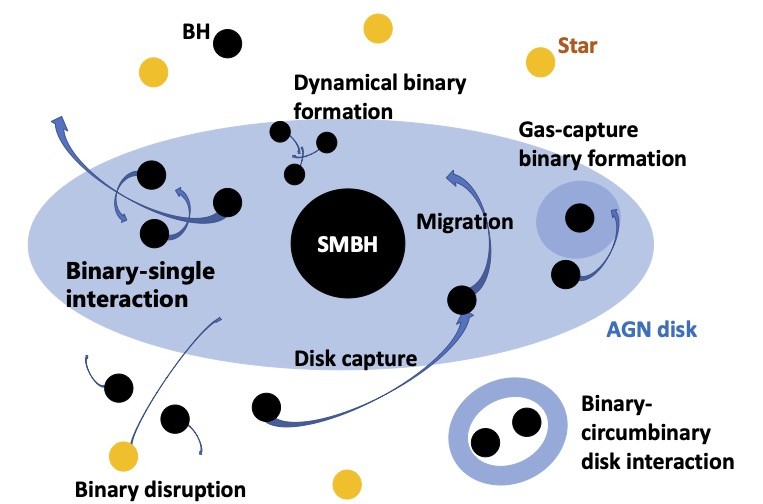 The landmark discovery of gravitational waves (GWs) by LIGO in 2015
has ushered in a new area of astrophysics.  THEA members are engaged in
several aspects of this new field.

The majority of GW events discovered by LIGO and VIRGO have been
mergers between stellar-mass black holes.  The astrophysical origin of
these ultra-compact BH binaries is currently not known, and is being
investigated by THEA members Haiman, Levin and Metzger.

It has been increasingly recognized that the joint detection of
electromagnetic (EM) emission and/or high-energy particles and GWs can
produce novel information impacting many fields of astrophysics and
cosmology.  THEA members have been exploring the possibility of EM
emission from mergers involving stellar-mass compact objects,
including black holes, neutron stars, and white dwarfs (Beloborodov,
Haiman, Levin, and Metzger).

GW emission from more massive black holes is expected to be detected
from ground-based pulsar timing arrays and by the space-based GW
detector LISA, planned to be launched in the mid 2030s.  The nature of
these GW events, including their abundance, the nature of their EM
emission, the properties of their GW waves is also actively studied in
the THEA group (Haiman, Levin).